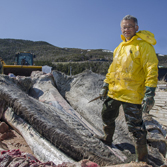 Burton Lim is a mammalogist and assistant curator at the Royal Ontario Museum. He helped design the Bat Cave (new and old) and even has a bat named after him. Burton has worked at the ROM for 30 years, visited caves and jungles in 18 countries, and recently carved up those two blue whales in Newfoundland. He’s also one of Barry’s many uncles. Burton spoke with us about human evolution, the grossest thing he’s ever experienced, and why bats are generally wonderful. He also talked about the ROM’s standing in the scientific world, and why scientists avoid politics.