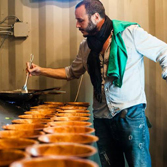 Anthony Rose is the genius chef behind Toronto restaurants Rose and Sons, Big Crow, and Fat Pasha. He studied at the California Culinary Academy in San Fran before working under several New York City food titans, including Jean-Georges Vongerichten. He also stole swigs from Barry’s birthday Scotch. Anthony spoke with us about the first time he ate bacon, why Jews love Chinese food, and running the Drake Hotel’s kitchen. He also talked about getting drunk with Anthony Bourdain, and what it would be like to “Cook It Raw” in Canada.